Nora Nicolaidis is settling up.
"The thought of lying down in a bed helpless, losing my dignity, is my worst fear", she says.
She has put her house on the market, the childcare she performed for her daughter for the last four years has now passed to a minder, and all her bills are paid. But it is not her home town of Portland Oregon she is settling accounts with, it's life. Nora has advanced breast cancer - she was first diagnosed 13 years ago. 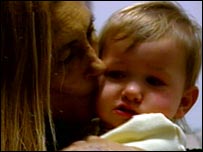 She has run through the gamut of treatments but when it spread to her bones and then recently her liver she knew she was in the endgame with the disease. External symptoms Nora is 62; a still beautiful Greek woman with a lyrical turn of phrase, she has a delicate bird-like frame but the cancer is forcing itself outwards now.
She is jaundiced from her liver disease which has turned her skin and eyes yellow and her belly is swollen from the tumours. Nora is enjoying her time with her grandchildren "I have always been thin," she reflects, "but now I look like I am pregnant, I feel I am pregnant with my death"
In fact, her body is over run with the disease and she knows that she doesn't have much time left. The cancer will steadily cause her liver to fail and as it does, she will struggle to eat, the pain she feels daily will increase, more and more of her bodily functions will shut down and in the end even her mind could start to fail.
Nora says that in life she has always been very active, an outdoors person enjoying hiking, camping, skiing. "The thought of lying down in a bed helpless, losing my dignity, is my worst fear, I didn't know how to handle it." Alternative option: So, she argues, she is grateful she lives in Oregon and has another option. This is the option for my family not to see me suffer
The state is the only location in the US which permits physician assisted dying. This is the right for terminally ill patients with just six months to live to be prescribed and to self-administer a fatal dose of barbiturates. In this way they can choose not to endure the pain, loss of control and loss of dignity that can sometimes accompany the end of life.
"I am not scared of dying," said Nora, "I am scared of how I am going to die." Sitting in her Portland home with her two grandchildren, 15-month-old Melina and four-year-old Andoni, tearing around the room, Nora exudes an almost joyous serenity and strength that belie the grim inevitability of her situation.
Peace She ascribes the peace she has achieved with her death to her decision to use Oregon's Death with Dignity Act. It is not about committing suicide, she argues, but about allowing her to control the manner in which she dies. "When I realised there was a solution, that I don't have to go through that in the last few weeks and I started the process, a weight was lifted and I felt freer from that day.
"I took extra energy in me and sleep better because the burden of how the last weeks of my life would be, is gone." She says all her family and friends are supporting her in this choice and it allows her to die peacefully with those she loves around her. "This is the option for my family not to see me suffer. This is something that is my wish. I want to have a celebration for life and I will do it when I am ready." 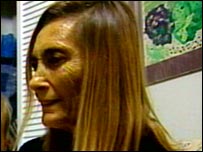 Nora's cancer is at such an advanced stage that she probably only has months, maybe just weeks to live. Drugs ready Her prescription for 200ml of liquid barbiturate now sits at the pharmacist, waiting for collection. So how does she square her passion for life with her prescription for death? "It goes very much together," she argues.

"As you go close to death, life gets more precious regardless of how you are.
"The thinner the string of life gets for you the more you hang on to it."
"I choose to go happy and having this option took off the fear and the burden I had of the end coming, because that was pulling me down a lot."
"Now I am free - free to enjoy when my grandchildren come and both run on me, free to hug them.
"To see their smiles is beautiful, it's more beautiful than it was a year ago before I made this decision, its more precious now."
"I am for life - for good life. And good death."
*** BBC News medical producer in Oregon
Assisted Suicide in Oregon
Patients must be in final six months of terminal
illness
Patients must make two oral requests and one written request to die, each separated by a two-week period Patients must be mentally competent to make decision
Two doctors must confirm diagnosis
Lethal prescription of drugs prescribed by doctor and administered by patients themselves
Nora Nicolaidis was born 62 years ago in Egypt, from Greek parents and attended Greek School. In 1957, along with other ethnic Greeks her family was forced to immigrate in Athens Greece, where
while attending Sivitanidios School, she ‘s got married. In 1967 she immigrated with her husband to the United States, where she received her degree as an architect. She has two children and two grand children.